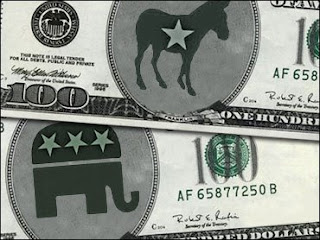 With just one vote to spare, House Republicans rammed through a bill repealing limits on campaign contributions, which Missouri voters first imposed in 1994 with 73.9 percent support. The measure, SB 1038, cleared the House on a near party-line vote of 83-72. Gov. Matt Blunt is expected to sign it into law.

Under current law, individual donors can give no more than $1,350 to a statewide candidate, $675 to a Senate candidate and $325 to a House candidate per election. When the repeal takes effect on Aug. 28, donor will be able to give unlimited amounts.

The various amendments House Democrats had prepared offer included putting the issue on the November ballot for voters to decide and delaying the effective date of the bill until next year to avoid changing the campaign finance rules in the middle of the 2008 election cycle. Majority Republicans, however, shut down debate to force a vote before those amendments could be offered.
Posted by Rep. Mike Daus at 8:54 PM