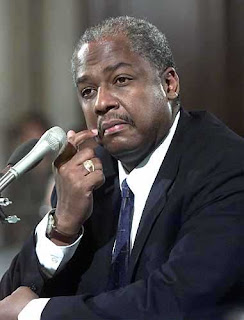 Missouri Supreme Court Judge Ronnie White announced on May 18 that he will resign from the bench effective July 6. White, the first black judge on the state’s highest court, was appointed by then-Gov. Mel Carnahan in October 1995. He served as chief justice from 2003 to 2005.

White, 53, announced no specific plans for when he leaves the court. White’s departure will give Republican Gov. Matt Blunt his first opportunity to appoint a Supreme Court judge. The court’s current roster features five judges appointed by Democratic governors, including White, and two selected by Republicans.
Posted by State Rep. Mike Daus at 2:07 AM