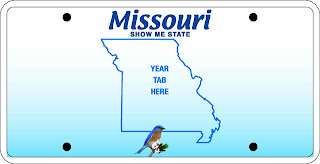 English teachers and other sticklers for proper grammar could be irate when Missouri’s newly redesigned license plates go into circulation this summer with a grammatically incorrect version of the state’s nickname. The error, which the Missouri Department of Revenue says it will not correct, also apparently violates state law.

The state’s nickname on the new plates will read “Show Me State.” Because the words “show” and “me” form a compound modifier, the rules of grammar require that they be hyphenated, Missouri Southern State University English professor Dale Simpson told The Joplin Globe. State law also requires Missouri license plates to bear the phrase “SHOW-ME STATE,” hyphen included.

About 2.8 million of the new plates already have been made. A revenue department spokesman told The Associated Press the error won’t be corrected on the remaining 10 million plates that are scheduled to be produced.
Posted by Rep. Mike Daus at 3:15 PM

I could care less.