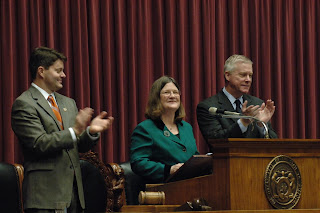 During her State of the Judiciary address to the Missouri General Assembly on Feb. 5, Supreme Court Chief Justice Laura Denvir Stith promised to provide more openness to the process of selecting nominees for the state’s high court and Court of Appeals. The process came under intense criticism this summer by Gov. Matt Blunt and others during the selection of candidates to replace former Supreme Court Judge Ronnie White.

Under the Missouri Constitution, the seven-member Appellate Judicial Commission headed by the chief justice reviews applicants for court vacancies and submits three finalists to the governor, who must select one of them or forfeit the decision to the commission. Blunt complained that none of his preferred candidates made the final cut before ultimately selecting Patricia Breckenridge to replace White.

Claiming it is exempt from Missouri’s Sunshine Law, the commission has operated in near-total secrecy. Stith pledged that in the future the commission will publicly post the times and locations of its meetings, although the proceedings themselves will remain closed. Stith also said the applications of finalists will be made public, as will general demographic information on all applicants before the finalists are selected.
Posted by Rep. Mike Daus at 11:26 AM