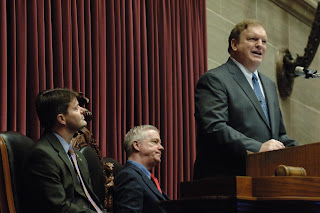 In 2004, voters ratified Amendment 3, which redirected existing state money to transportation from general revenue and authorized MoDOT to sell billions of dollars in bonds to pay for immediate improvements to the state’s transportation system. However, Amendment will leave the state with a $2.62 billion transportation debt.

Beginning in 2010, the department will be forced to shift a significant portion of its budget to paying off the debt, which won’t be retired until 2029. As a result, MoDOT’s construction budget will plummet by more than half from $1.23 billion this year to $569 million in 2010. With the reduced construction budget, MoDOT will “barely be able to maintain our highways,” according to the department.

Although the looming transportation funding crisis has been known since Amendment 3 was ratified, neither Gov. Matt Blunt nor the Republican-controlled General Assembly has taken any steps to prepare for it.
Posted by Rep. Mike Daus at 11:30 AM