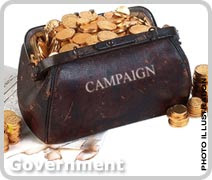 The Senate on Feb. 21 passed a bill to repeal Missouri’s campaign contribution caps and allow individual donors to give unlimited amounts to candidates. The bill passed 24-9, with most Republicans in favor of repealing the limits and most Democrats opposed. The measure must still pass the House of Representatives.

Missouri voters first imposed the contribution limits in 1994 with 73.9 percent in support. Given the overwhelming voter support for the limits, state Sen. Wes Shoemyer, D-Clarence, said voters should decide if they should be repealed. However, Shoemyer’s amendment to place the bill on the statewide ballot was defeated.

Current law limits individual donors to giving $325 to House candidates, $675 to Senate candidates and $1,350 to candidates for statewide office. Political party committees can give 10 times the individual limit.

If the bill, SB 1038 sponsored by Senate Majority Leader Charlie Shields, R-St. Joseph, is signed into law, it would take effect on Aug. 28. As a result, the existing caps would remain in place for the Aug. 5 primaries but be lifted before the Nov. 4 general elections.
Posted by Rep. Mike Daus at 4:17 PM