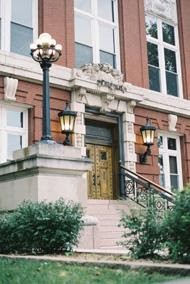 The Missouri Supreme Court on Feb. 19 struck down a 2006 state law that sought to force registered sex offenders who live within 1,000 feet of a school or day care center to move. The unanimous court said the law violated the Missouri Constitution’s prohibition against laws that are retrospective in operation.

A 2004 law prohibited sex offenders from moving within 1,000 feet of a school or other child care facility but didn’t apply to offenders who lived within such proximity before the law took effect. The General Assembly passed follow-up legislation in 2006 to require such offenders to move.

The court ruled unconstitutional only the 2006 changes to the law and let stand the original 2004 statute prohibiting sex offenders from moving near a school. In doing so the court used the same reasoning it applied in a 2006 case that said the state’s mandatory sex offender registry applies only to those who committed sex crimes after the registry was established in 1995.
Posted by Rep. Mike Daus at 4:15 PM