KINDER DROPS OUT OF GOVERNOR'S RACE 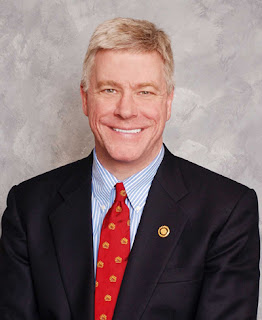 Lt. Gov. Peter Kinder, the first Republican to declare his candidacy for governor after Gov. Matt Blunt last month unexpectedly decided to forgo re-election, surprised supporters by dropping his bid for the office. Kinder, who instead seek re-election to his current job, announced his decision on Feb. 8 at the state Republican Party's annual Lincoln Days event in Springfield.

Kinder's withdrawal winnows the GOP field to two candidates - State Treasurer Sarah Steelman and U.S. Rep. Kenny Hulshof. While avoiding being part of a hotly contested gubernatorial primary, Kinder's decision creates a Republican primary in the lieutenant governor's race. Former state Rep. Jack Jackson, who says Kinder urged him to run for lieutenant governor before abandoning his gubernatorial bid, said he is staying in the race.
Posted by Rep. Mike Daus at 9:40 PM